Ryan Hamilton released one of the best power pop albums of 2015 and he’s performing tracks from the disc in a four part online concert series.  Billed as Ryan Hamilton – Tiny House Tuesdays, Ryan broadcasts through Facebook’s Concert Window. The first of the series of four was well worth the $3.00 ticket fee. It was informal and silly (sometimes a bit too silly) but provided an opportunity to hear some of your favorite singles played live and acoustically as well as some fun impromptu song humor.

Most of the shows take place at 4pm EST, a particularly inconvenient time for many –  but if you can do it, I’d recommended checking it out. Next scheduled broadcast is February 9 (tomorrow). 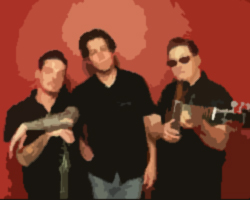 Within the next few months, expect to see some great new power pop releases. The Heartless Devils will follow up their great 2012 LP, El Diablo Sin Corazon, with an EP expected any time (literally). It’ll be entitled The Devil’s Garage. Take my word for it – IT’S SCORCHIN’.

Todd Herfindal will follow up Right Here Now, one of the best powerpop albums of 2013, with a new full length release. Todd is recording right now (no pun intended) and has “15 tracks in the works” and still more to choose from. Expect a street date for some time in the Fall of 2016.

Going back a little further, Meyerman’s Who Do You Think You Are was one of my favorite power pop LPs from 2011. Todd Meyerman tells me that he as a new band together that he’s really excited about and is recording his follow up release “as we speak”. The new songs are REALLY good so watch out for this one. Expect a late 2016 release.

There’s a new EP on the way from everybody’s favorite Spongetones, too. Jamie & Steve have been recording their new one which, if its as good as the last several, will be in this year’s top 10. Look for a release date any time now.

Finally, Seth Swirsky and The Red Button will have another full-length disc out this Spring. The last two were instant classics so be sure not to miss this one either.

What do you call a beautiful girl on the arm of a drummer? A tattoo.

How does a bass player make his car go faster? He takes the Pizza Hut sign off of the roof.