The last few weeks at Carolina Orange have been all about living legends. This week it’s a super-group calling themselves The Split Squad and their new LP entitled Now Hear This. 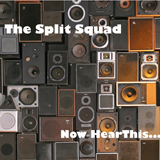 The Split Squad is made up of Ed Munoz of The Plimsouls, Mike Giblin of Parallax Project, Clem Burke of Blondie, and Keith Streng of The Fleshtones (hence the reference to Living Legends). They’re joined by Josh Kantor, keyboardist extraordinaire who has the distinction of having the world’s greatest day job. He’s the organist at Fenway Park.

All of these great musicians from great bands, one naturally fears that the total will be less than the sum of their parts. Little Village comes to mind as an example. Nick Lowe and John Hiatt are among the best songwriters and performers in the world but when you put them in the same band, the product wasn’t as special as any of their solo efforts.

While not necessarily reminiscent of The Plimsouls, Fleshtones, or Blondie, The Split Squad’s Now Hear This is nonetheless a pleasing mixture of all their influences and sure to make a fan of any of these bands smile. One might use the Plimsouls’ Kool Trash, a mid 90’s “reunion” release with a denser sound than Plimsouls fans were used to as a frame of reference for this disc – maybe a sign of things to come. That line-up featured Peter Case, Eddie Munoz and Clem Burke on drums.

Giblin has written most of the material and their are great melodies and hooks a plenty. And with contributions from Scott McCaughney (Young Fresh Fellows. Minus 5), Peter Buck (REM), Hugo Burnham (Gang of Four), and Mike Gent (The Figgs), there is more collective genius in the making of this disc than any that’s come along in a very long time.

“She is Everything” is the highlight, a song with an irresistible hook and a driving beat that is immediately reminiscent of The Gang of Four’s “Armalite Rifle”. This may be the best single of 2014. “Feel The Same About You’ is a classic slice of powerpop and another favorite as well as the McCaughney/Giblin authored “Superman Says”,  and “Messin’ Around”, which concludes what may be the most pleasant surprise of 2014. This one’s a 2014 top tenner.

Look for The Split Squad at a venue near you as they’re touring to support the disc. Opening for the Fleshtones, its a bill that is simply too good to be missed.