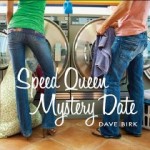 Dave Birk’s Speed Queen Mystery Date is one of those Kickstarter projects. If you’ve not heard of Kickstarter, it is a platform through which one can raise money for worthwhile creative projects. Cotton Mather used Kickstarter to raise the capital necessary to reissue their classic Kontiki and filmmaker Tom Weber used the platform to find the funds to support his Troubadour Blues project.

After repeated listening I think I can say that the $5000 plus raised was worth the investment. That’s not much to record an LP on, but Birk seems to have made the most of it.

Influences are apparent from the get-go. The LP starts out with an up tempo pop number entitled “Hey Jody” which gets things off on just the right foot. I must admit that the next couple of cuts don’t move me as I didn’t see anything particularly special about them. But the second half of the disc is truly outstanding.

The title cut, “Speed Queen Mystery Date”, would have had hit single written all over it 15 years ago when there still was a music business to speak of. The Greg Hawkes like keyboards they work great here. This cut is VERY Fountain of Wayne-ish, and a real winner. It may be one of my favorite singles of the year. “Maybe it’s OK” is a slower number but a good one.

Minneapolis, MN based Dave Birk’s self funded debut is a lot of bouncy melodious fun right from the opening notes of “Hey Jody.” Influences are squarely in the Gin Blossoms meets Fountains of Wayne arena….But then we enter FOW-land with the title track and “All Things Retro” with a ton of pop culture references. The remaining tracks just as fresh, especially “Country Music 101? with a dead-on instruction of how to write a hit country song. A great debut! – Alan at Powerpopaholic

“Country Music 101” is a song about teaching a class to write a hit song. I particularly like this song, having done the county college teaching thing myself. While I can’t say I agree with Alan at Powerpopaholic that this is a “dead-on instruction of how to write a hit country song”, Birk gives a dead-on description of what it’s like to prepare one’s self to teach a course on anything creative at a county college. Listening to the song the first time, I laughed at a few points.

“An eclectic collection of perfectly crafted pop songs with a bit of New Wave rock edge. The ironic lyrics, catchy melodies, and hilarious stories are steadily present from beginning to end. Birk’s songs are melodically infectious and immediately engaging on the surface and lyrically smart, sensitive, insightful, provocative and often sad and/or cynical at their heart. The on-the-surface simplicity of the songs, coupled with sincere yet witty lyrics prove to be a can’t-miss formula.” – Max Humphries

The disc finishes with a flourish. “All I Can Think About is You” uses a very well placed clip reminiscent of Magical Mystery Tour, “Summer’s End” with all it’s hand claps and nah-nah’s does a great job of creating a summer vibe, and “It Doesn’t Get Any Better Than This” is as close to a country song as a powerpop guy can get. 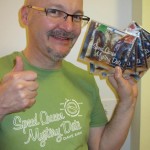 While there are a few early cuts that I could do without, all in all this is a very satisfying trip through the spectacles of Mr. Birk. Oh, and it’s got a nice insert with lyrics contained within. . Listen to sound samples at Dave Birk’s page.

One last thing….Minneapolis guys seem to have this thing about laundromats. See the Knit Delicate release of a few years back entitled “Pressed”. This is also a fine record and makes we wonder what’s in the water up there.