Terry Anderson Jimmy’s Arcade is smart. It’s funny. Anderson has written some songs that are kinda like the roller coaster at a country fare. While you’re on the ride, you laugh, you cry, and even scream a little. And when the coaster stops, you wanna do it again. 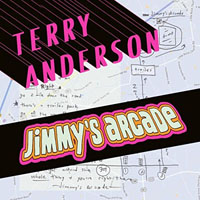 Shortly after a one minute introduction of sorts, the band kicks things off with a humorous look at “Internetin”. “Never Get Enough of You” has a bar room blues flavor to it that hits this listener just right. And he’s just getting started.

“Punchline” is a straight up pop song with a killer hook, jangly guitars and lyrics that are eminently relatable. “Cash That Check” is another blues infused number that hooks you from the first few seconds. Things really kick into high gear as Anderson channels Rockpile and Dave Edmunds for “Eat My Dust”. “Cornbread” is perhaps my favorite track on Jimmy’s Arcade. It’s the closest thing I’ve heard (thematically) to an old favorite of mine, Dan Penn’s “Memphis Women and Chicken”. What’s the next best thing to food? Songs about food.

Anderson & Co. conclude with the perfect song to end the LP, the heartfelt “Carl Wilson”.

Imagine Hee Haw repackaged as a pop-rock opera. Some really great pop songs lay between humorous commercial interludes to make for a hick concept album of sorts. And it’s probably the funnest (is that a word?) album of the year. So check out Terry Anderson Jimmy’s Arcade.

Get the CD at Kool Kat Musik or a digital download from CD Baby. It is highly recommended.