More Punk-Pop with The Buzzcocks’ The Way

This review is a little late as I just learned about The Buzzcocks’ The Way,, their 1st LP since 2006’s Flat-Pack Philosophy. Released last year, The Way is the Buzzcocks’ 9th album and one that while coming up short of being a band classic, nonetheless has its merits.

Steve Diggle gets equal billing on this one as he penned half of the dozen songs on The Way. And while Pete Shelley gives us the track most reminiscent of the pop-punk sound of early Buzzcocks, “Keep on Believing”, it’s Diggle’s songs that really shine here. 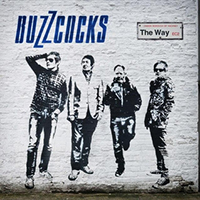 The disc opens up with Shelley’s “Keep On Believing”, an uptempo pop-punk piece that will please the Buzzcocks faithful. Unfortunately, other Shelley penned compositions on The Way aren’t nearly as catchy as this one. Fortunately, Steve Diggle’s songs really shine. The album’s best, catchiest number, “In The Back”, belongs to Diggle as well as a number of other good tracks. “Chasing Rainbows/Modern Times” is another keeper with it’s adaptation of the Ramones‘ most often used guitar riff. “Third Dimension” is another worthwhile composition.

Like the Ramones, The Buzzcocks were the best at what punk-pop embodied, with 2:50 sugar-sweet pop hooks, albeit with a jagged edge. While this disc will please the old, hard-line Buzzcocks enthusiast, it never reaches the level of those early songs like “Ever Fallen In Love” or “Harmony In My Head”. Maybe it isn’t fair to compare these new songs to the classics. The Way has its moments (particularly the Diggle songs) but will mostly appeal to the already converted. Back in the day, if you enjoyed the old Steve Diggle post-Buzzcocks EP “Here Comes The Fire Brigade” (as I did), you’ll enjoy this disc. But if you’re looking for new Buzzcocks classics, you may come away a little disappointed.