If you’ve not heard Didn’t Planet, its about time you did. You may have read about this extraordinary band from a post on this blog as they released the best CD of 2012 entitled We’re Going Nowhere. If you’ve not heard the best powerpop band from Boston since Nervous Eaters, there is no better time than right now.

Didn’t Planet has just released a new single, “Boston Girl” the net proceeds of which will be given to support the Parent Project Muscular Dystrophy fund in honor of a close friend of the band. 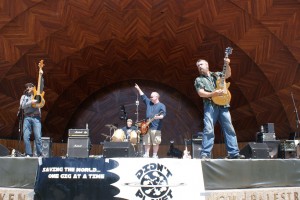 And there’s more! To promote the song, the band is holding a contest, offering two tickets to the August 17th Red Sox game at Fenway Park vs. the New York Yankees. Since the song’s story revolves around a Red Sox fan and her close encounter with a pin striped acquaintance, its a very appropriate prize. Details on entering the contest are posted on the band’s Facebook page right here.

“If you have been to a Didn’t Planet show in the last 15 years, you have most likely met our friend Dave Generous and his family,” the band said through its Facebook page. Generous was born with muscular dystrophy. “He and his family have been huge supporters from the very beginning, and this is one small way of saying thank you.”

How often do you get to play air guitar to something philanthropic? NEVER! So go buy “Boston Girl” as a digital download RIGHT HERE and do something to make your momma proud, Goddammit. And you’ll feel good about yourself, too.