I moved south about 5 years ago and, knowing nothing about the music scene in these parts, found my way to the nearest club. That night at The Garage, a Winston Salem dive bar, Tim Lee 3 would take the stage to the delight of the locals. I remembered Tim Lee, the band’s figure head, from The Windbreakers, a powerpop band of some note from the ’80’s. So I hung around for the show.

They were impressive. And different. I was particularly taken by a song entitled “Saving Gracie”, which would turn up on their 2008 LP entitled Good 2 Be 3. At the time I remember thinking that if one were to combine X and Neil Young & Crazy Horse, this is what it would sound like.

It’s years later and The Garage has changed hands (we miss you, Richard). The local music scene is hardly worth anyone’s attention these days. So when I heard that Tim Lee 3 would be releasing a new LP (street date Feb 28), I had to pick it up and slap it on my digital turntable.

And it slapped me back. I wasn’t ready for anything this real.

Tim Lee’s “Jetboys” is about small towns and big dreams that the songwriter knows will never be realized. “You’re Not There”, has a killer hook and great, very expressive lead vocals from Susan Bauer Lee.

The Windbreakers were a very good powerpop band that never quite caught on the way they should have, and I’m guessing that “Monkey Dance” is about that experience. An uptempo number and the closest thing on this record to a powerpop song, Tim sings “We never took the hand off, never got the chance to turn the handle on the organ, make the monkey dance.” He describes his last days in The Windbreakers with “One day it all got old, or maybe it was me. But nobody seemed to notice
when I took my leave”. 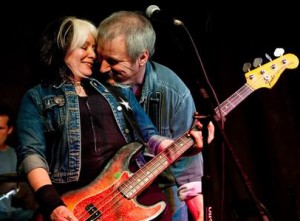 One of the highlights on the LP is “Cut-Rate Divorce”, where Tim and Susan sing together ala John Doe and Exene. “Parallel lines, they’ll never meet, that’s just simple geometry. so go ahead boys, do the math and stuff cause sometime one and one just don’t add up….Cut rate divorce. You might wanna consider the source. 400 bucks cash. No blame assigned. No questions asked.” A great song with a stalking baseline and lots of feedback.What more could a music fan ask for?

I won’t go through the entire LP track by track but I will tell you that the LP gets even better the deeper you go. “Open the Door” and “Says Baby Strange” are the best numbers on a fine LP that deserves much more attention then it will likely receive, being that no one in the band is nearing puberty.

“Everything is good these days but all of my friends are dying. Davie may and Lisa may but nobody else really wants to stay. Open the door. Open the door, I can’t stay here any more.”

Much too honest for the American Idol crowd.

Next show in the Carolinas: April 5 @ Snug Harbor, Charlotte NC

Photo above by Bill Foster