Getting Re-Acquainted with The Flashcubes’ Power Pop

When I was a freshman at Syracuse University, many more years ago than I care to think about, there were few bands from NY that mattered. In Buffalo, they had The Jumpers. Albany had Blotto, a band that was almost Vaudevillian. Syracuse was blessed with the best of them all, The Flashcubes.

We didn’t realize what a good thing we had until until they (or we) were gone. I’m betting they didn’t know it at the time either. Well, it’s taken roughly 30 years but we can finally say it. They’re BIG….in Japan.

The Flashcubes have taken better care of business the second time around, releasing three CDs: a live disc, an anthology of the old tapes, and a new studio album, Brilliant (out next year on Northside). Last Christmas, they were picked to open a New York show for current buzz band the Star Spangles. They’ve even been accorded the ultimate power-pop honor: getting big in Japan. After meeting some Japanese promoters at a previous IPO, the Flashcubes went over and played some well-received shows — not quite at Budokan, but at a couple of 500-seat clubs in Tokyo. – Boston Pheonix

If you were in Syracuse when I was, you may have seen one of their many shows at the Firebarn or Jab. Or perhaps the Labor Day gig on the Quad opening for The Records. In the event that you missed ‘Cubes-mania in it’s heyday, you’ll have a second chance to experience it…if you live in Tokyo, that is.

According to PowerPop Academy, a Japanese website, The ‘Cubes (with Ducky Carlisle standing in for Arty Lenin) will make a quick swing through Japan in early April. Billed as the “Greasy Rocker’s Party Vol. 6”, Hiroshi Kuse and Air Mail Recordings will host the guys and promote the tour, commencing on April 6 and running through the 11th of the same month. This isn’t the first rodeo for Mr. Kuse and Air Mail as they’ve hosted tours for 20/20 and The Records in the past, so they know what they’re doing. These shows should be a blast.

Week long Japan swings are great for the soul. They don’t make much money (believe me, I know whereof I speak) but the Cubes will fill a couple of 500 seat rooms along the way, remember what it’s like to have groupies, and maybe break even after it’s all said and done. Ain’t nothin’ wrong with that.

Below, I’ve translated the information from Pop Academy as it was in Japanese. If you should find yourself in
the land of the rising sun in the first week of April and you want to remember what it’s like to be young,
get your tickets now.

Re-determination of years in Japan, 10 The Flashcubes! 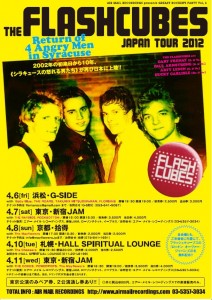 THE FLASHCUBES JAPAN TOUR 2012
Maverick 70’s New York punk was called “angry men of Syracuse”, 10 years from the first visit to Japan in 2002 to play a visit to Japan again. Ducky Carlisle participation also known as The Major Labels band members, Mike VIola Bleu and the three original members and drums. The men became known as the originator of the power pop up just two singles, this day should go to make sure that reason.

Japan Commemorative CD to be distributed free of charge to visitors at the first-come-first-served basis according to the air mail recordings.

To each performance is a power pop band no doubt greet the tour final ROCKBOTTOM or any of the album “REVENGE” of itself in the 2/4, etc. The Mayflowers in Kyoto will be playing.

Details of the Air Mail Recordings from which the invited official website please visit.
? Please check the site, such as above without fail because it may have changed, such as live information.

Many thanks to the webmaster at The Powerpop Academy.