Chris Richards and The Subtractions are back with an addition. Andy Reed of The Legal Matters joins The Subtractions for Peaks and Valleys. As with past releases, guitar pop is the order of the day punctuated by some of Richards’ best songs ever, lots o’ guitar and big harmonies. 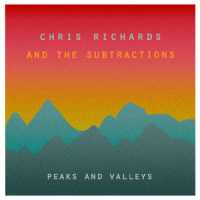 The catchy “Half Asleep” starts things off just right leading into “Just Another Season”. With it’s chiming guitar and whopping hook of a chorus, this latter track is definite singles material. The slower “Wrapped in a Riddle” juxtaposes the earlier songs on Peaks and Valleys beautifully. A stunningly good version of Big Star’s “Thirteen” as well as a cover of Matthew Sweet’s “Someone to Pull the Trigger” serve to further bolster a top notch collection of originals.

With all that said, the best songs are later in the album. “The End of Me” and “Call Me Out” feature stellar guitar work and killer harmonies. Come to think of it, the song writing and harmonies are awesome throughout the entirety of Chris Richards and the Subtractions’ Peaks and Valleys.

Get Chris Richards and the Subtractions’ Peaks and Valleys from Kool Kat Musik (CD) or at the band’s bandcamp page (digital).