The video game sound effects, an infectious bounce and catchy chorus give a strange carnival aura to the opening track of the new Mod Hippie LP. Scratch that…more of a freak show feel. While this is likely a political statement by the song’s writer, it’s also an indication of the surprises in store for the listener throughout Big Wow. Doug McGuire, Adam Marsland, Teresa Cowles, Conner Claxton and Matt Zook are joined by drummer extraordinaire DJ Bonebrake (X, The Knitters) this time around. With Big Wow, they collectively create a dozen outside-the-box garage tunes, each with their own distinct, appealing quirks. 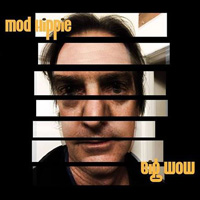 Beneath the studio embellishments (which are very effective, incidentally) lies some really solid, catchy garage/pop songs. “Guatamala” will make you wanna grab your surfboard and hit the beach. It’s surf guitar nirvana. “Psycho Romeo” is getting airplay already with its mega-hooky chorus (nice use of Pac-Man sound effects!). The acoustic guitar, sort of a Spanish guitar riff, gives “Gone All Day” a uniquely appealing feel.

My favorite track though, is right out of the ? Mark and the Mysterians 60’s garage playbook. The side-winding, keyboard propelled “150 Levers” is a garage gem that would have scored BIG on American Bandstand’s Rate A Record back in the day. It’s got a great beat and you can dance to it. Really.

There are some other worthwhile tracks on Big Wow including a cover of Elvis Costello’s Night Rally. In fact, there isn’t a bum track in the bunch. Street date for this release is February 10. Mod Hippie Big Wow is a Karma Frog release and will be available through iTunes, amazon.com and directly from Karma Frog.