Having read a little bit about this Philadelphia trio, I expected to hear a pop punk band. Instead, I got something with a great deal more depth than your average pop-punk record. Cayetana‘s New Kind of Normal isn’t normal in any sense of the word. And that suits me just fine. 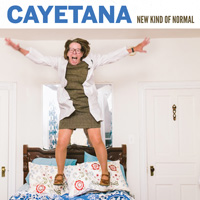 Around the same time punk was catching on back in the late 70’s, Martin Hannett was working with a band that also hung it’s songs on a dominant bassline, creating an aural landscape, one that felt desolate. Joy Division had an extraordinary sound fueled by Ian Curtis’ deep depression.

And yet, it was some of the most dance-able stuff I’d ever heard. I’m not saying that Cayetana are anything close to Ian Curtis or Joy Division. And some of the tracks on New Kind of Normal are much more positive than your average Joy Division track. But they create similar bass heavy, sound-scapes that give the listener a sense of isolation. And like Souxsie and the Banshees or Gang of Four, you can dance to it.

Best of all, they can write a hook as evidenced by the opening track, “Am I Dead Yet?” and the catchy “Mesa”. The wandering bassline and skittering percussive work in “Too Old For This” gives us the sense that everything in their world is tenuous. Things could fall apart at any time. This mood carries through the entirety of New Kind of Normal. Other standout tracks include “Certain for Miles”, “Phonics Failed Me” and “Grumpy’s”.

There are no throwaway tracks on New Kind of Normal. The songwriting is surprisingly good. Augusta Koch’s vocals are expressive and the rhythm section of Allegra Anka and Kelly Olsen are extraordinary. Cayetana New Kind of Normal won’t appeal to everyone. But if you wanna dance your way out of the dolldroms, I can’t think of a better record for it. Get Cayetana’s New Kind of Normal at their bandcamp page.