Back with his second solo record, Reno Bo hits all the right notes with Lessons From a Shooting Star. “Sweetheart Deal” is as radio-friendly a single as has been released this year. Bo channels Dave Edmunds for “How Do You Do”, another great track. At this point, one could hardly blame you if you were to think that the rest of the LP could not possibly maintain this high standard.

You’d be oh so wrong. 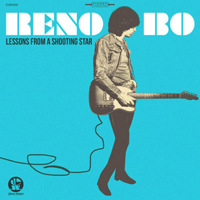 The Zevon-esque “Strange Maps” slows things done but maintains the high songwriting standard established with Lesson’s earlier tracks. “And I Know She Did” opens like something out of a Big Star composition. “The Brighter Side”, co-written with Brendon Benson, is another melodic gem and “Sleeping Sun” will remind you of latter career Beatles. “Mumbo Johnny” gives blues fans something to sink their teeth into, too.

Recorded entirely in his Nashville apartment, Reno Bo has taken what is likely a small budget recording and given it a big budget sound. Great songwriting can do that. So one might ask, what have we learned?

Powerpop simply doesn’t get any better than this. For my money, Lessons From a Shooting Star is the best LP of 2015 so far. Buy it here.