Those of us who were fortunate enough to be residents of Syracuse NY in the late 70’s and early 80’s remember The Flashcubes with reverence. Recently featured in Ken Sharp’s just released Play On! Powerpop Heroes Volume II, The ‘Cubes had “chops” out the ass and were, for many of us, the best band never to have recorded for a major label. 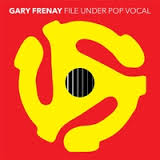 Labels had a difficult time categorizing their sound. Were they punk or were they pop? Record execs think in terms of what they can easily market so in hindsight, it should come as no surprise that the Flashcubes weren’t signed by someone.

Judging by the title of his new LP, Gary Frenay did indeed get the memo, albeit it a bit late – at a time when there is little left of the record industry to speak of, really. Entitled File Under Pop Vocal, the new Frenay disc showcases his penchant for writing great melodies and a hooks that’ll grab ya.

With contributions from Tommy Allen (The Flashcubes, Television), Arty Lenin (Flashcubes, Paul Collins Band), The Kennedys and Marshall Crenshaw among others, Frenay has the help of a band of all-stars too.
Some highlights: “Blue Topaz” which sounds like it was more than a bit influenced by Elvis Costello, “Forget How Good Love Feels” with its great Beach Boys vibe, and the equally memorable “We Could Be Brothers”. Brian Wilson’s “Its Like Heaven” is a great choice for a cover with it’s soaring vocals, and that flowing, weeping guitar.The LP closes with a gorgeous (albeit very short) demo entitled “Surf’s Down”.

File Under Pop Vocal is a must for Flashcubes fans, folks who remember The Jab, The Firebarn and anyone who enjoys a good melody. Get it at Amazon.com.