Categories Menu
Home » Music » Australian Power Pop; Its the On and Ons Calling

Australian Power Pop; Its the On and Ons Calling

For the best garage/surf music on the planet, one can listen to the Chevelles’ Girl God. If it’s beautiful melodies and pop hooks that float your boat, there is no better place to look than The Someloves’ Something or Other. The Hoodoo Gurus’ “Bittersweet” is one colossal hook from start to finish and the Gurus may possibly kick ass harder than anyone outside of the Young brothers. Nothing beats Australian power pop.

So it’s no wonder one of the year’s best releases comes from another Australian band – and just under the wire to make it onto our “best of” list for 2015 (look for that early next week). 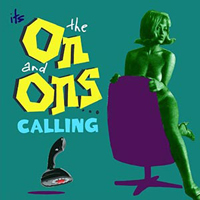 Simply put, Its the On and Ons calling is Australian power pop of the highest order. The opening track, “All Over Heavenly (You’re My Everything)”, is a jangly gem and something between The Plimsouls’ “Million Miles Away” and classic Chevelles. The ringing guitars in “Long Ride” are exhilarating. I swear, this tune should come with a warning label – May cause heart palpitations and a massive head rush.

Next up, a very pleasing slice of 60’s era pop entitled “Before Our Eyes”. It’s a slight departure from the rest, giving this collection of radio friendly goodies some added dimension. Then they crank it back up to 11 with “Rockin’ With the Beat”. “Don’t Let Me Down” is one big hook from start to finish and an immediate favorite. You’re bound to hear this song’s chorus in your head long after the CD is over.

“Two Things on My Mind” is another winner with keyboards and hand claps that give this track a distinctly 60’s vibe. All that having been said, they saved the best for last. “Hard to Say Goodbye”, with it’s fantastic harmonies and memorable chorus, leaves the listener wanting more.

Not unlike the bands mentioned at the top, the On and Ons are a bit of a “supergroup” themselves, really. Each member has an impressive resume, hailing from noteworthy bands such as The Screaming Tribesmen, Barbarellas, The Stems, Hoodoo Gurus (!) and The Zeroes. Collectively, these artists make up a virtual who’s who in Australian power pop.

One final note: From what I understand, the band backed Paul Collins on his 2011 tour. Paul’s a good friend of this blog, so that speaks pretty loudly here.

I strongly suggest you get your copy of Its the On and Ons Calling from Kool Kat Musik TODAY.

For those how really love Australian pop music, check out one of the year’s better pop compilations entitled When the Sun Sets Over Carlton.

In the meantime, enjoy this preview: