New Powerpop from The Golden Seals

In 2011, The Golden Seals released what was one of my favorite LPs of the last several years. Increase the Sweetness was clever and incredibly catchy, and it left many powerpop fans hoping for a follow up soon. Since then, Dave Merritt and the band have kept a fairly low profile, writing and recording each song as time and circumstances allow. 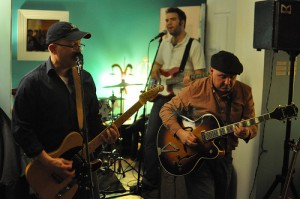 Just recently, Dave let it be known that he, Brian MacFarlane, and Phillip Shaw Bova will have the successor to Increase the Sweetness in the can before long. Expected to be released later in 2014, the disc’s single is a brilliantly catchy XTC-ish number. Entitled “Summon all the Goodness in Your Heart”, Merritt describes it as “a sweet pop ballad with a positive message we can all get behind (can’t we?)”.

“The idea for the next record was to do a double album–8 originals and 8 covers. I might get there, but it’s a big chunk. I’ve already recorded covers of I Have the Touch (Peter Gabriel) and How Come You Never Go There (Feist).” Dave hinted that he may also include a Nick Love cover, as well as songs by Prefab Sprout, Everything But The Girl. In other words, “it’s a big 80s fest”. – Dave Merritt

More on the upcoming The Golden Seals full length release as soon as it becomes available….