The Top Ten (not entirely) Powerpop LPs of 2012 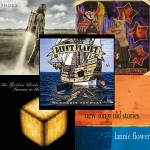 I’ve finally had a moment to gather my thoughts and come up with a top ten LP list for 2012. There were some very memorable discs and notable highlights including the world debut of Dave Birk’s Hey Jodie video. There were great new bands and some old dogs doing some terrific new tricks.

After all was said and done, here were the discs I found to be the most satisfying, the ones that not only caught my ear on first listen but also stood the test of time, getting better with repeated listenings:

1. Didn’t Planet – We’re Going Nowhere
They kick ass AND have a sense of humor. Every track is a keeper.
2. Shoes – Ignition
Better than they’ve ever been, great harmonies and memorable hooks galore.
3. The Golden Seals – Increase the Sweetness
Well crafted pop songs worthy of the best of the Brill building folks of yesteryear.
4. Lannie Flowers – New Songs, Old Stories
New songs that are seemingly so familiar you’ll be humming along.
5. Throwback Suburbia – Shot Glass Souvenir
Catchy as all get-go.
6. The Heartless Devils – El Diablo Sin Corazon
You’ll smile at the Ramones-like sing along, shout aloud chorus of Blame You.
7. John Fullbright – From the Ground Up
I had forgotten how good roots rock could be until I heard this.
8. Dave Birk – Speed Queen Mystery Date
Dave Birk isn’t a mystery any longer. Great Fountains of Waynes-ish stuff.
9. The Records featuring John Wicks – Works in Progress
Great collection of demos and rare cuts from the guy who brought us Starry Eyes.
10. Green Day – Uno
I knew these guys were power poppers at heart. Now I have the proof.

Feel free to agree, disagree, and provide any input in the comment section below.