2011 was a very good year for powerpop fans with the release of The Bangles’ Sweetheart of the Sun and The Records’ re-release of Rotate. While neither band has released material in 2013, things are anything but quiet for two key members.

On the evening of November 24, John Wicks & Debbi Peterson will perform the first of what we hope will be many shows together at McCabes in Santa Monica CA. As if that weren’t enough, ex-Hollie Terry Sylvester will be appearing on the same bill. 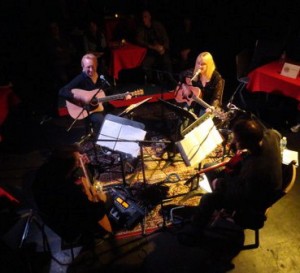 Both John and Debbi were kind enough to find time between writing and rehearsing to answer a few questions. Thanks also to music enthusiast and blogger Jeff Pickle for providing an interesting question or two.

I remember watching with surprise as The Bangles appeared on Dancing with the Stars in an effort to promote the LP, Sweetheart of the Sun. How has music promotion changed since you first started in the business?

Debbi: I suppose there’s always been the element of going on a very popular TV show to get some promotion. The thing is, these days that doesn’t necessarily guarantee record sales. When I started out, TV and radio promotion seemed much more important and there were more promotional opportunities than now.

You wrote perhaps the best song on the most recent Bangles LP, “Ball & Chain”. How does the process of co-writing with John differ from the way in which you’ve worked in the past?

Debbi: Thank you! I wrote “Ball ‘N’ Chain” around 1990 after the Bangles had broken up! I always thought it was a Bangle-type song and was glad we finally got to do it. I’m loving the songwriting process with John now. I find that I have more productive ideas now than I did then, plus the working environment is very freeing and supportive.

John – People know you for the powerpop anthems “Starry Eyes” and “Teenarama”, among others. The music you’ve been co-writing with Debbi is more acoustic in nature. Is this a product of your “maturing” as an artist or simply a case of exploring a new medium(like an artist moving from oils to sculpture)?

John: Not really. So far she and I have been writing using acoustic guitars, both 6 and 12 string, but that’s been more for convenience than anything else.

Even back in the day, when I was collaborating with lyricist and drummer, Will Birch, I would very often compose melodies using an acoustic guitar, and as you probably know, the majority of those songs were performed and recorded using electric guitars.

I composed the melody to Will’s lyrics for what became Starry Eyes, just prior to a rehearsal session in late ’78, in about 5 minutes, using a 1956 vintage Gibson Les Paul Junior, totally unplugged. So it is with the songs that Debbi and I have co-written, some tend to work best acoustically, some work better full-on electric and others can work well, either way. I guess I’d like to say that it’s because I’m maturing as an artist, but truth be told I enjoy writing using a whole bunch of different instruments, including keyboards, and of course mixing it up in that way, really helps fuel my inspiration. My being a guitarist, one could say that moving from guitar to keyboards is more akin to exploring a new medium, since I’m a hopeless keyboard player. Haha! But as far as the guitar goes, I often find myself employing alternate tunings, which I like to do when I’m really suffering from writer’s block!

If you knew back in your Kursaal Flyer days what you know today about the record business, would we still know you for your work with The Records?

I understand that you will be performing a number of fairly high profile dates including a November 24th show at the legendary McCabe’s Guitar Shop in Santa Monica. With both of you having a wealth of material from your respective back catalogs to draw from, there are so many wonderful possibilities for Sunday night’s show. What should those who attend any of your shows expect?

Debbi: There will be a mixed bag of Bangles/Records songs, plus a few new ones we wrote together and haven’t performed yet!

John: High profile dates… Yes, our agent is busy fielding offers as I type! Haha! Seriously, there’s been a lot of interest in our new project and the plan is to play some East Coast dates together in the early part of 2014. The setlist will consist of some Records’ and Bangles’ classics, interspersed with some brand new creations. I think it’s fair to say that we’re both very proud of all the material, and with our respective backgrounds, audiences will be treated to some very cool harmonies.

Finally, will we be seeing a Peterson/Wicks LP some time in the future?

John: Yes indeed. There are plans in the works for a recording at some point in the not-too-distant future, which is very exciting. In the meantime our co-writing continues, and during the process, we’ll very likely be employing a wide variety of different instruments!