I met Ducky Carlisle of PopFilter many years ago after a show he had done with Dian Zain and Paul Armstrong as part of The Most, a Syracuse power pop band. The “venue”, if you can call it that, was an old man bar on So. Crouse called The Orange, and the drawing card was the 3 beers for a buck promotion on Saturday nights.

Such was the state of Syracuse Power Pop at the time and we went backstage to talk with the band. Then I threw up on Ducky’s shoes. So much for memories. 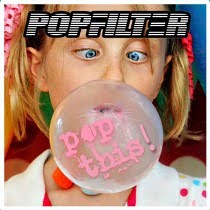 In PopFilter, he, Bleu, and Chris Anderson have a band that really rocks. Their influences jump out at you from the first track. Take a glop of ELO, a dash of Cheap Trick, and a smidgen of anything British Invasion, bake it at 350 for 40 minutes, and you’ve got PopFilter’s Pop This.

Here’s what the folks at Starry Eyes and Listening had to say about Pop This!:

“Chris Anderson and friends have created a polished power pop sound that, albeit a familiar formula, is crisp and fun. As well as having several standout songs, this disc is worth the price of admission just for the fact that it may be the final work left behind by the late, great Will Owsley who co-produced and played bass and piano on parts. Also worth noting is the participation of Ducky Carlisle. Those who remember the Syracuse NY scene in it’s heyday remember The Flashcubes, Screen Test, and The Ohms, all of which Ducky played an integral part in. Here he co-produces with Bleu and Owsley, lending his pop sensibilities to help create a pretty decent pop record. This one is worth picking up. Highlights are the second cut, “Take The Shortcut”, which could pass for a long, lost Hall and Oates song and “Holly Would” is as sweet a powerpop confection as you’ll find anywhere.”

And like holiday leftovers (and Syracuse power pop), it gets better the second and third time around.

Highlights: Short Cut, Holly Would, Back To Zero