Review: The Doughboys – Poppin’ fresh and Shakin’ Our Souls

The Doughboys are another one of those bands that I should have heard of but had not. They’re from the same part of Jersey as myself and, from what I understand, I used to live in the same town as one of the band’s main songwriters, Richard Heyman. I’m familiar with Heyman’s solo powerpop efforts which I’ve always enjoyed, so I figured I’d give this disc a whirl.

I read recently that the band originally formed in 1963. Hard to believe, especially because while their latest disc, Shaken Our Souls, has a definite retro feel to it, the songs are so vital and energetic that they could have been written by folks have their age. You have to love the rapid fire machine gun blast of Heyman’s drums, the blazing hot guitar work of Gar Francis, Mike Caruso’s work on bass, and the way Myke Scavone’s vocal calisthenics are perfectly suited the which are perfectly suited to this material. Scavone reminds me a little bit of Bill Hurley (Inmates).

The songs, written mostly by Heyman and Francis, are rough and bluesy, giving critics every reason to compare them to The Stones or Pretty Things. Throw in a little bit of George Thorogood or the lesser known Inmates and I think you get an even more complete picture. 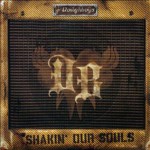 The first two tracks get things off to a fast start. “Land” has a definite Stones feel to it while “Rush on You” reminds me of the Inmates, the guys who had a hit with “Dirty Water” back in the late 70’s. “Tuggin’ Me Back” has a real R&B vibe to it and is one of my favorite songs on the record. I can easily see David Johansen singing this one. That being said, Scavone does a great job, maybe even better than Johansen could do.

The most memorable songs are the next too very catchy tunes, “Keep Your Dog Off Me” and “Shakin’ My Soul”. Heyman and Francis are particularly impressive on the former and the latter, the title song, has a totally irresistible hook. You’ll be humming “Shakin’ My Soul” after a single listen.

The release winds things up with “Route 22”, an ode to a very storied stretch of highway. It seems that the highest and lowest moments of my life happened while traveling that piece of road. Sounds like Heyman and I share that in common.

There are 14 songs in all, and each one guaranteed to shake your soul.

In addition to the band, significant contributions are made by two other notable individuals. “It’s A Cryin’ Shame,” features Paul Revere and the Raiders’ lead singer Mark Lindsay on sax and background vocals and the disc is produced by the GripWeeds’ Kurt Weil, who’s Christmas CD was reviewed right here. Under the
Influence of Christmas was not only the best holiday CD of 2011, it may have been one of the best releases of all last year.

From a recent outdoor performance in Mercer County, NJ, here’s Shakin My Soul…..