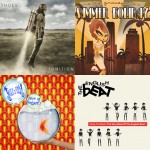 With local bands like the dB’s and Superchunk releasing new discs this season, there’s reason for excitement in these parts. But it gets better. MUCH better. If a new dB’s release wasn’t enough, Joe Jackson has a new one (joined by Iggy Pop on one cut!), powerpop legends Shoes give us all new material, and there’s a live Jellyfish (yes, Jellyfish!) on the way. There’s also some great reissues coming soon.

This schedule gives all of us just a few reasons to look forward to the dog days of summer:

Influential twangy power pop group the dB’s are back with their first new album in 25 years. Recorded with original members Peter Holsapple, Chris Stamey, Gene Holder and Will Rigby, Falling Off the Sky is the first record to feature the band’s original lineup in three decades. Opener “That Time Is Gone” is a loose head-bobber with playful keyboard stabs and a slithering lead guitar riff, while “Far Away and Long Ago” is a free-flying ballad with a gentle, steady chorus and graceful violins. – Rolling Stone

26 – June
Joe Jackson – The Duke
(While this is not a powerpop release, it’s really intriguing)

The album features Jackson covering a number of tunes associated with the jazz great, including “Take the A Train,” “Satin Doll” and “It Don’t Mean a Thing (If It Ain’t Got That Swing”). The album features several special guests, including the pride of Pittsfield Township, Iggy Pop, on the latter track. – AnnArbor.com

The Madd’s former drummer /songwriter is about to release his first solo album. Summer Holiday will be released by V2 Records on the first day of Summer, that’s June 21! You can bet that it will be filled with relentlessly catchy, hook-laden, guitar driven power pop. – Powerpop Overdose

Power pop band Jellyfish releases its first-ever live album through Omnivore on July 3. Live at Bogart’s captures a 1991 gig in Long Beach, CA, with the band touring behind their debut album Bellybutton. The 13-track concert recording includes five previously unissued performances; the remaining tracks had seen release only as B-sides and on compilation discs. Live at Bogart’s will be available on CD and on vinyl, first as a limited-edition (1,500 copies) double-LP on translucent blue vinyl, followed by an unlimited edition on black vinyl thereafter. – An Omnivore’s Appetite

10 – July
The English Beat – The Complete Beat
(okay, not powerpop either…but worth listening to)

On July 10, U.S. fans will be able to buy the 16-track Keep the Beat: The Very Best of the English Beat as well as the Complete Beat box set, featuring expanded versions of 1980′s I Just Can’t Stop It, 1981′s Wha’ppen? and 1982′s Special Beat Service, plus two discs’ worth of bonus material — most of which is previously unavailable on CD, including extended and dub mixes, Peel Session recording and live tracks (see full tracklists below). – SlicingUpEyeballs.com

Bob Mould, famed Hüsker Dü guitarist, signed with Merge Records recently, and that label is now set to reissue his post-Hüsker Dü band Sugar’s complete catalog. The band’s critically acclaimed 1992 debut, Copper Blue, will be released as a double LP set with the 1993 Beaster EP along with a bonus download, containing b-sides and a live set. Their second and final album, File Under: Easy Listening, will be released as a single LP with a bonus download. The reissues are due out on July 24th, 2012. – Skinhead.net

Which one are you most looking forward to?