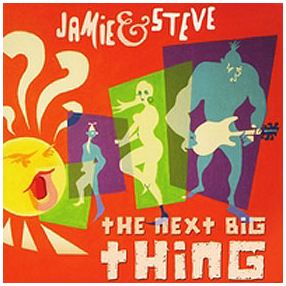 The Next Big Thing is the most recent release from one half of Charlotte North Carolina’s Spongetones, that half being Jamie Hoover and Steve Stoeckel. Spongetones style Brit-pop is still the order of the day for Jamie & Steve, but they stretch their creative wings here in a way the ‘Tones never did.

Total disclosure: Although I like The Spongetones in small doses, I was never a big fan. Everything was too much the same for me. It was only after having seen Hoover play in Don Dixon’s band that I really became intersted. Dixon put out a great CD a few years back, The Nu Look, and Hoover contributed “Skinny”, one of the best songs on the release. Having seen and heard Dixon’s band at the Berkeley Cafe in Raleigh, I was further impressed by Hoover’s guitar work and vocals. Having met him briefly afterwards, I don’t mind telling you that he’s a helluva nice guy too.

Jamie & Steve’s new “record”, The Next Big Thing, is available as a download only to the best of my knowledge. Amazon.com has a strange interface for downloading music and while a bit confusing, it’s not too difficult to use even for an old technically challenged guy like me.

From the opening seconds of the first cut, “Seaside Sparrow”, I knew my time and money had been well spent. I was greeted with a very XTC-ish sound, a very welcomed surprise. The next track “Can We Start Again, Girl”, is pure powerpop with great harmonies and catchy as all get-go.

“Dancing On Ice” is another pop gem, reminding me thematically of XTC’s “Mayor of Simpleton”, but just a little. Vocally, Stoeckel delivers his lines in a similar fashion to Partidge or Moulding. “Half a Mind” starts out with a Joe Jackson type vocal style with strings and horns thrown in, but in the most tasteful of ways. Half a Mind is experimental in a way, the way the Spongetones never were.

The soaring vocal harmonies of “Over My Head” make it a treat for the ears and the final and title cut, “The Next Big Thing”, is a fine conclusion to a great and varied pop record. Again, the vocals are the focal point but the melody is just irresistibly good.

This is the stuff that the ‘Tones never did, exactly the kind of thing I has always looked for from them but never got. One of the most enjoyable records of 2011, in a fairer world this truly would be The Next Big Thing.

Order Jamie & Steve’s The Next Big Thing at Amazon.com.